We hope you enjoy your stay here and partake in some of our local flavor. Ellendale offers beautiful parks, excellent lodging, a variety of culinary pursuits and shopping, cultural, recreational and educational opportunities for people of all ages.

Whether you’re a long-time resident or visiting for the weekend we want you to savor your time in Ellendale! 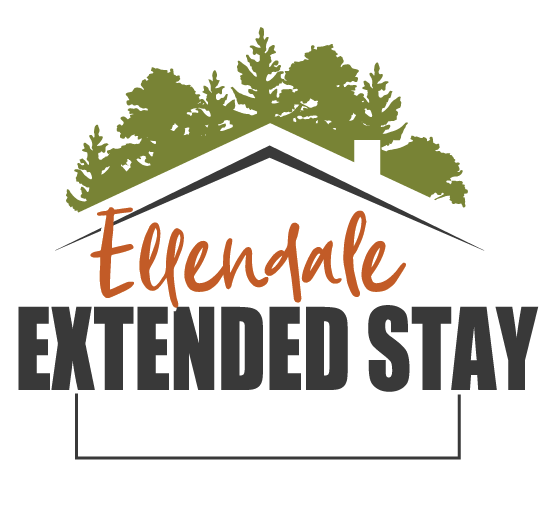 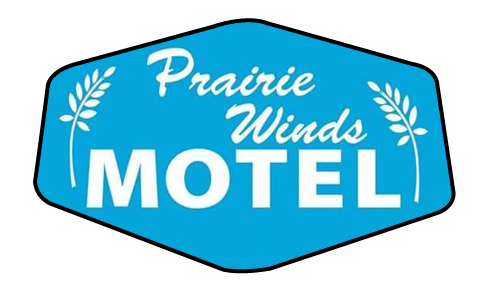 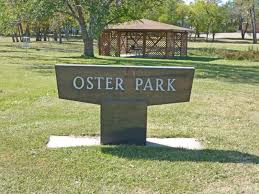 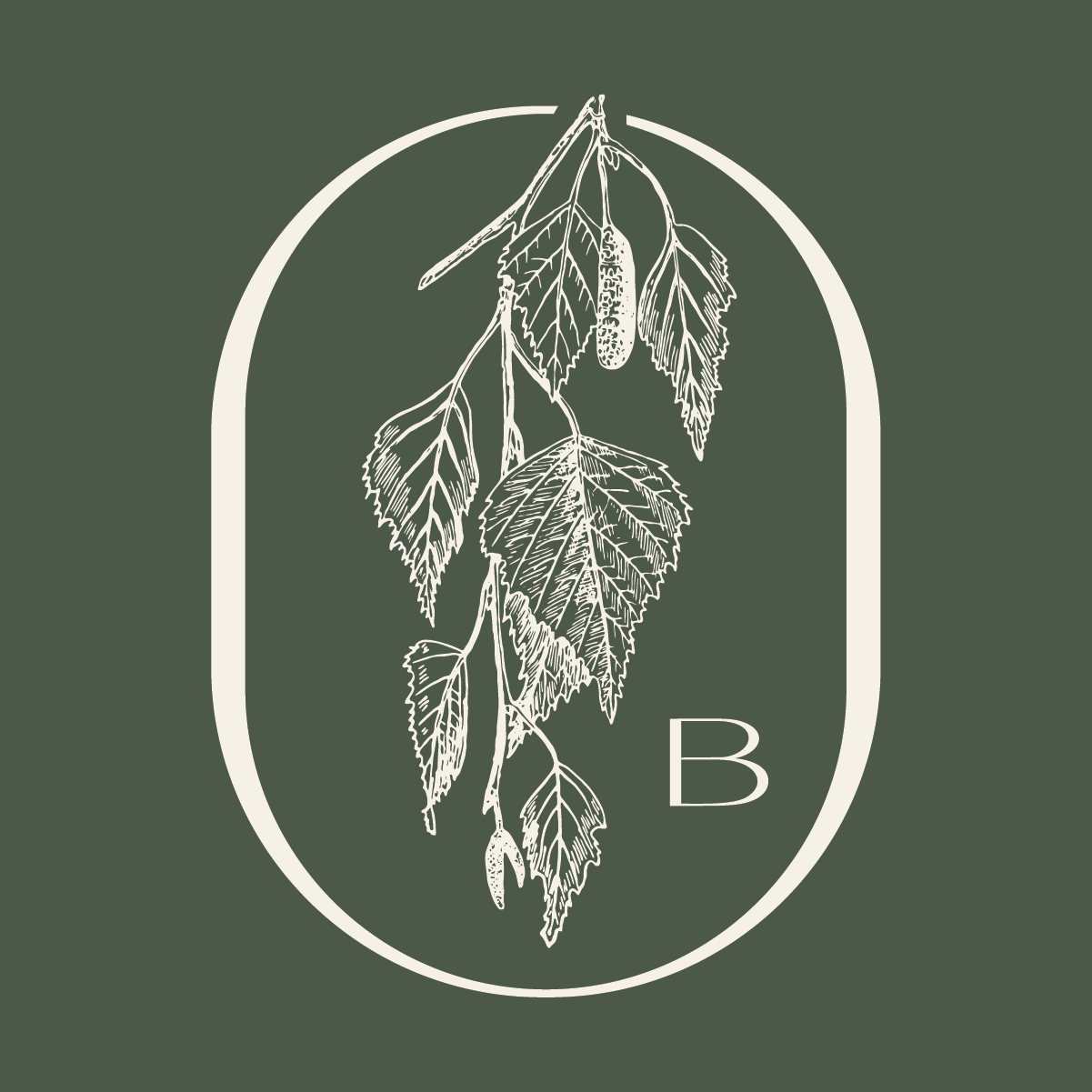 Airbnb: The Birch on Third 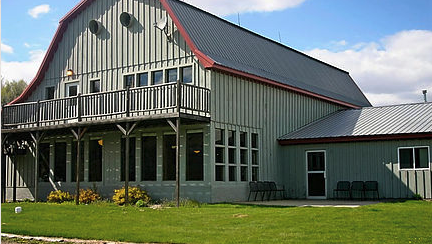 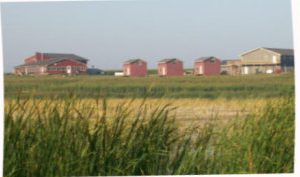 The city of Ellendale was named by railroad town site officials for Mary Ellen Dale Merrill. She was the wife of S.S. Merrill, who was the superintendent and general manager of the Chicago, Milwaukee & St. Paul Railroad.  Ellendale was the first town on a railroad in this entire region, and so it became a great distributing point for settlers supplies.

Ellendale was the first permanent settlement in Dickey County. It began in October 1881. Early in 1882, the Ellendale townsite was platted, with the survey bearing the date of May 8, 1882. The plat was filed in the Registrar’s office on August 22, 1882 and was voted the county seat November 6, 1882 with Ellendale winning over Keystone 162-62 votes. Ellendale was incorporated as a village July, 1883, and as a city August 25, 1889.

Homes, businesses and services flourished in Ellendale. Then, on the windy night of May 9, 1916, came the big fire. Three blocks of businesses, a church and 21 families were burned out.  With characteristic western zeal, Ellendale rebuilt.

The Ellendale area has an active historical society involved with preserving history of the area. The Coleman Museum and the O.P.E.R.A, Inc. groups are very active in the community raising funds to maintain and develop these historic landmarks. 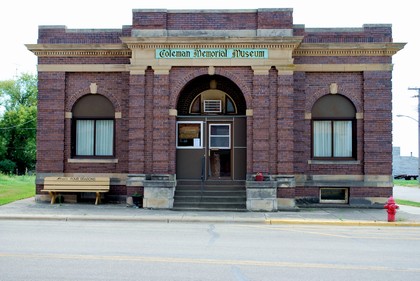 Dr. Lauren Coleman, an Ellendale native purchased the former Farmers National Bank Building in 1927. He moved is dental practice and his family home into the building and Dr. Coleman kept seeing patients nearly until his death in 1968.   When his wife, Lucile died in 1984, her grandchildren generously donated the building and many family artifacts, including Dr. Coleman’s 1928 Ritter Dental Machine, to the Ellendale Historical Society.

The building houses a great variety of interesting artifacts donated by area families and businesses.  It also holds a large variety of items related to Ellendale’s college, which began its history in 1899 as the State Manual Training School, then became the State Normal and Industrial School, and ultimately finished its service as a state institution in 1972 as the Ellendale Branch of the University of North Dakota.  Since then the campus has been the home of Trinity Bible College.

In 2002, the Historical Society completed a 36×80 addition on the back of the main building, to house artifacts previously kept in the old Depot Museum.  The building is handicapped accessible and has themed sections devoted to Ellendale’s businesses, households, churches, newspapers, farmers railroads (the Milwaukee and the Great Northern), its country schools, and the service of its men and women in the military.

Persons interested in any aspect of Ellendale’s history, and those who would like to donate significant historical items or support us financially are urged to contact us at  colemanmuseum@gmail.com, or call Ken Smith, President of the Society, at 701-320-2794 (cell).  We are a 501c3 organization and we rely on the support of our generous donors. also, rely on annual memberships of ten dollars per year for our operations.  Our operation is highly economical and we are determined to be good stewards of your investment.

Hours: Our summer hours from the week after Memorial Day in June to the week of Applefest in September
Wednesdays: 10:00 to 2:00; Thursdays: 1:00 to 5:00, Fridays: 1:00 to 5:00.
If you are passing through at a different time or need accommodations for a group or other purpose, please call Ken Smith at 701-320-2794 (cell), or Jeanette Ruenz at 701-535-0442 (cell).
Location: 50 W Main, Ellendale
Free Admission: Donations Welcome
Historical Tour of Ellendale is available via the Pocketsights App. Download the app and search Ellendale to find the tour!

For the first two years after organization, Dickey County did not have an official courthouse.  In the fall of 1884, action was taken by the county commissioners to build a courthouse, which would be two stories high and would house county offices on the first floor and the courtroom and public hall on the second floor.

The first courthouse was built at Main and 3rd Avenue on the lots where Evergreen Place is now located.  Judging from pictures, the courthouse appeared to be a structure about 40 by 60 feet.  There were four chimneys to take care of the heating.  The courthouse was completed and readied for occupancy by the beginning of 1885.  Brown and Mallory were the builders and according to county warrants that were issued, the cost was $5,448.

The dedication of the new building was held on July 4, 1912 and county offices were moved from the old building into the new courthouse.  The setting for the new courthouse covered an entire city block at a cost of about $100,000.

Some major events since then have been the replacement of the coal heating system by an oil system in 1973, the listing on the National Register of Historic Buildings in 1980, the windows in the dome were repaired in 1983 after damage from the 1966 tornado, an elevator was installed in 1993, the jail was removed in 1997, tuckpointing the exterior brick in 1998 and all windows replaced in 2005.

Four murals can be found around the inside of the rotunda.  They have been refurbished in the last few years as have the courtroom mural and ceiling and the main and second levels of the rotunda. 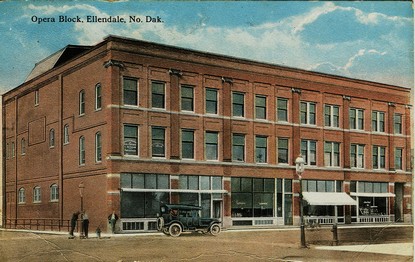 Listed on the National Register of Historic Places, the Ellendale Opera House celebrated its 100th anniversary in 2009.  This beautiful building was the site of a wide variety of events beginning with traveling theater productions at the turn of the century.  One of Ellendale’s oldest attractions, the Opera House is located on West Main Street.  The 3-story brick structure was built in 1908 when the local businessmen decided to plan for the future of their town.

They solicited funds up and down Main Street for the Opera House Corporation and finally got enough money to build two stories on top of the three businesses that were being rebuilt after a fire destroyed their establishments the previous year.  This grand building had its grand opening in February, 1909, with plays given by the Chase-Lister Theater Company.

The second story had offices along the south side, which were rented to attorneys, dentists and doctors.  The main part of the auditorium floor was for seating when plays and shows were held.  The seating capacity, including the boxes, was about 1000.  The chairs could be removed to provide room for dancing.  The third story was the balcony seating and several rooms and offices.

In the years that followed, the auditorium was used for high school plays and graduations, college plays and debates, dances, basketball games, wrestling and boxing matches, 4-H rallies, roller skating and other social events that required the spacious environment the building offered.

The building was eventually left empty in the 1980s after the roof began to leak and the remaining businesses vacated the building.  The building’s future looked dim until a non-profit organization, O.P.E.R.A., Inc. took ownership from the city and began the restoration project.  Since 2002 they have put on a new roof, rebuilt a portion of the back wall, and have renovated a section of the main street business space for a theatre for the performing arts, an exhibit hall for artists, and a community room.  This room is called the Opera House Lobby because it will become the lobby for the auditorium once it is restored.  It will house the elevator which will take guests to the second and third floors.

Presently the Lobby is used for Art Exhibits, theatrical performances and private parties.  In 2007 an Artists’ Showcase was held there.  Art media from 15 local artists, past and present, was on display.  700 people attended the Showcase during the weekend of Ellendale’s 125th Celebration.  North Dakota Governor John Hoeven was a special guest and in addition to his attendance at the Walk of Fame ceremonies and reception was given a tour of the Opera House upper stories.  Since that time the room has been used for Art Exhibits from the North Dakota Museum of Art, a traveling Smithsonian exhibit, regional artists’ displays, music programs, theatrical productions and private parties.

A new façade around the front windows was put on in 2010.  A new subfloor was put down in the second floor auditorium, which allows the space to be used for theatrical productions and music programs.  This larger theater can seat more people than the Lobby on the main level.

O.P.E.R.A., Inc. is determined to bring the magnificent structure back to its grandeur and make it useful to the community once again.  The restoration is being done by a group of dedicated volunteers, with the help of grants, donations and fund raising events.  If you’d like to visit the Opera House, stop by Crabtree Insurance or the Calico Cat to arrange a tour.  These businesses are also located on Main Street, west of Hwy 281 and near the Opera House.

Whitestone Hill State Historic Site marks the scene of the fiercest clash between Indians and white soldiers in North Dakota. On September 3, 1863, General Alfred Sully’s troops attacked a tipi camp of Yanktonai, some Dakota, Hunkpapa Lakota, and Blackfeet (Sihasapa Lakota), as part of a military mission to punish participants of the Dakota Conflict of 1862. In the ensuing battle, many Indian men, women, and children died or were captured. Military casualties were comparatively light. The Indians also suffered the destruction of virtually all of their property, leaving them nearly destitute for the coming winter.

Today, Whitestone Hill State Historic Site includes a portion of the battlefield and a small museum with exhibits explaining the 1863 Sibley and Sully expeditions and the Battle of Whitestone Hill (the museum burned November 2009 and is currently being renovated). There are two monuments, one honoring the Indian dead and a second commemorating the soldiers who died in the battle. A marker also recognizes two early settlers, Tom and Mary Shimmin. A fieldstone shelter beside the trail provides a resting point overlooking part of the battlefield and a freshwater lake. Nearby is a picnic area with a shelter, table, pit toilets, and a parking lot.

The site is open year round, but there is no snow removal service. Admission is free, and donations are accepted. 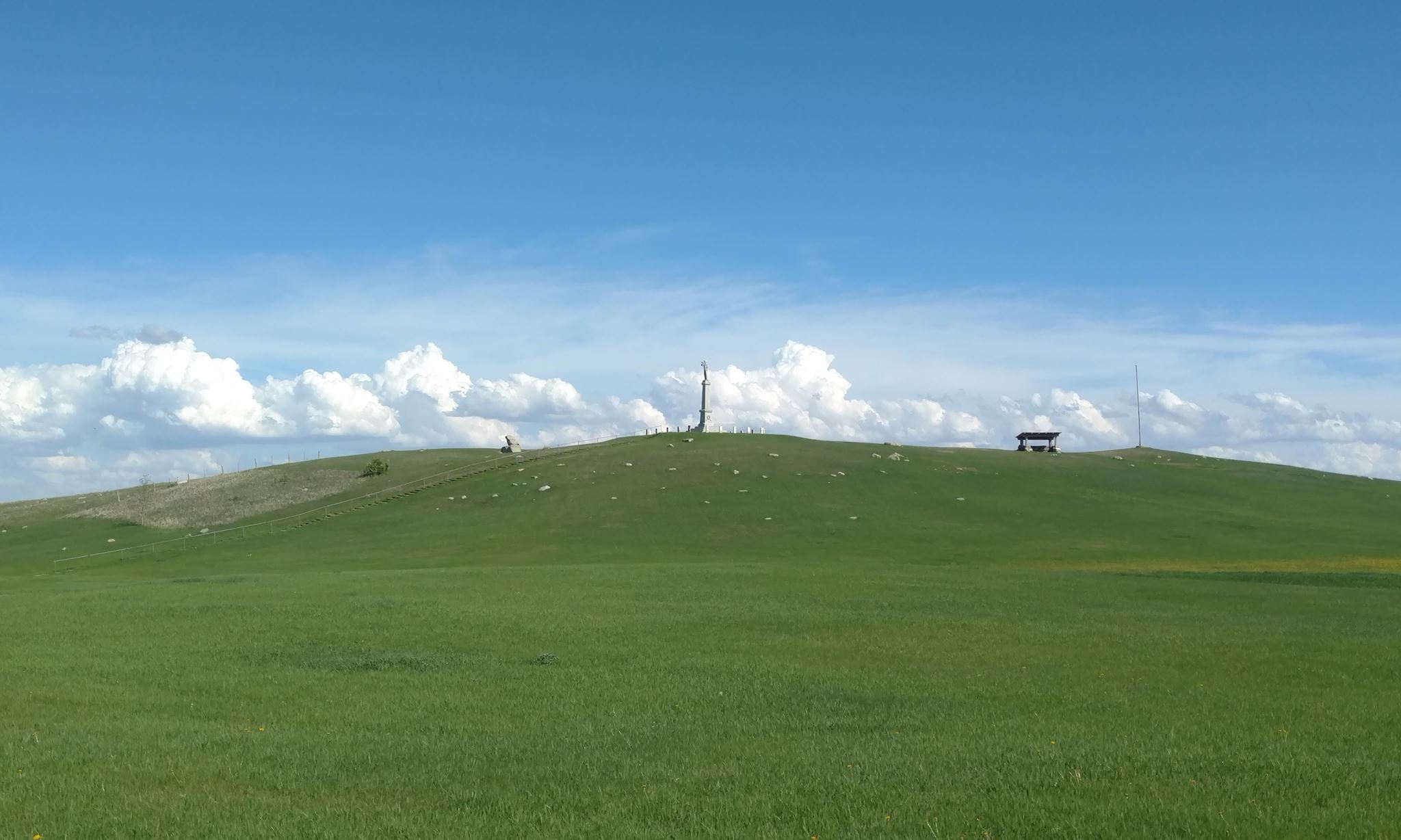 There are many opportunities for excellent hunting and fishing in the Ellendale Vicinity.  Often called the Pheasant capital of North Dakota Ellendale offers excellent guides and lodging services.  Ellendale is known for its great Pheasant, Goose, Duck and Deer hunting. 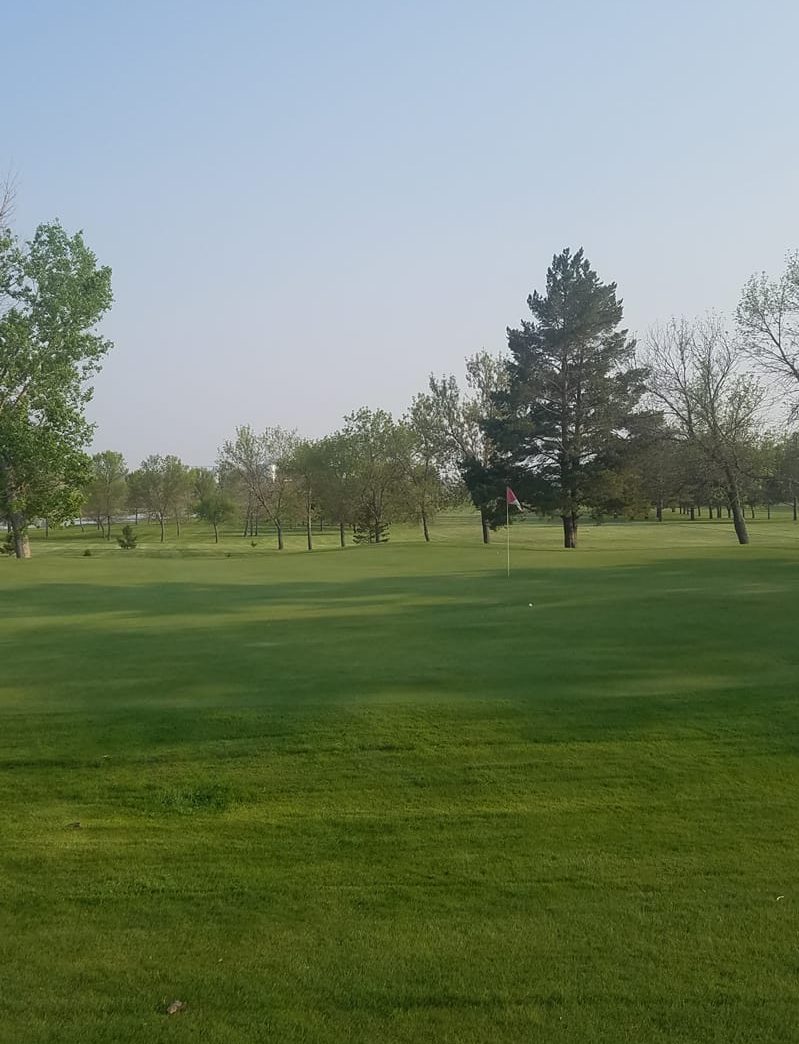 Located four miles south of town on Hwy. 281 is the Ellendale Country Club with its lovely clubhouse, built in 2008. The club and course are open to the public. Guests and members are invited to warm up on the driving range and then enjoy a round or two on the 9-hole course. The course is beautifully maintained and features grass greens, notting hills and watered fairways.

Whether your passion is hunting, fishing, birding, snowmobiling or history, Ellendale offers something for you. Visit our downtown specialty shops including an old-time variety store, coffee shops, a greenhouse and restaurants. Then tour the opera house, museum and court house. Head west on Hwy. 11 to enjoy the scenery and drop a fishing line into Pheasant Lake. Further west, you can stare up at one of the 120 wind towers in a farm that stretches from North into South Dakota.

Located on the main north-south migratory bird flyway, our region is host to a wide variety of birds that pass through during migration or make this area their year-round home. Over 100 species are spotted in our area, making Ellendale a prime birding headquarters.

During the hunting seasons, Ellendale is a great home base for your trip in search of pheasants, deer and other bountiful game. 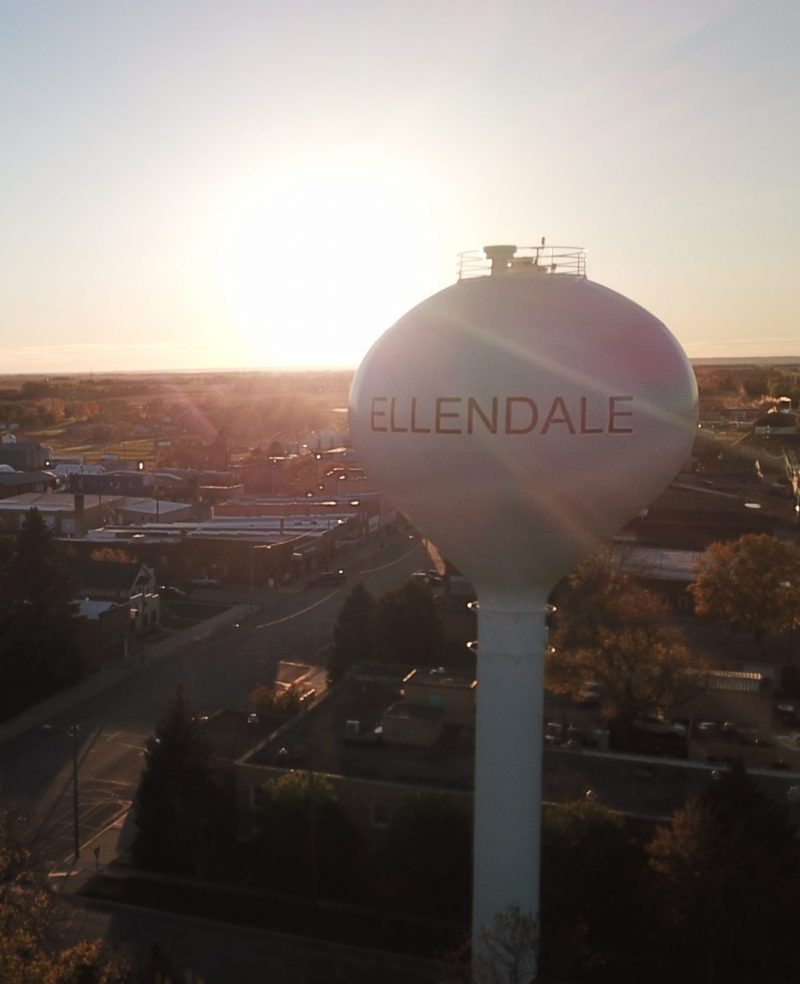